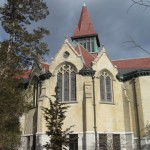 George Hutchings installed his Opus 451 here in 1898, a three-manual organ. Its replacement, a sizeable 1936 Aeolian-Skinner, was meant to follow in the wake of G. Donald Harrison’s sweeping statements at Groton School and Church of the Advent, with an orthodox stoplist, low pressures, and concern for mild clarity. Unfortunately, Houghton Chapel lacked not only the unenclosed Positiv but also the good chambers and supportive acoustics of the other two situations, and the instrument never commanded a similar regard. In the 1960s, local builder Conrad Olson extensively re-voiced the manual flue choruses and revised the Swell mixtures.

The Fisk organ in the gallery, that firm’s Opus 72, is the last to have been finish-voiced by Charles Fisk himself. It continues to be among his most fascinating works. Expressly informed by early Dutch instruments, with certain stops modeled after the famous Compenius organ at Frederiksborg Castle, the Wellesley organ took shape slowly, with discussion beginning in 1972, research trips undertaken in 1974 and 1977, and the organ inaugurated in 1981. It was the first major American instrument tuned in meantone, which, coupled to the organ’s key action (with sub-semitones) and wind system (the organ can be foot-pumped), opened a new sound horizon for performing Dutch and German music of the pre-Bach era. The energy and vision of Owen Jander brought about the completion of aspects left prepared in 1981. The Pedal Posaune and carvings were installed in 1983 and the Brustpedalia in 1987, and the case oiled and gilded in 1992. 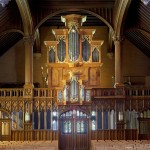