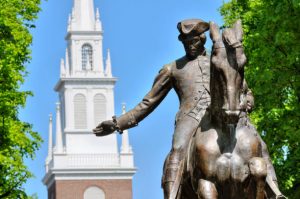 Old North Church is so deeply embedded in the American imagination for a certain midnight ride that few can confirm its flavor as Episcopalian or its proper name as Christ Church. Completed in 1723, it remains the oldest church building in Boston. The legendary “one if by land, two if by sea” steeple, funded by shipping merchants as a navigational aid, fell victim to hurricanes in 1804 and 1954. Its peal of eight bells cast in 1744—the first in British North America—survives. The gallery clock has been clearly visible to the preacher since 1726; the four statuettes were captured from a French ship in 1746.

Closed during the Revolution, at the heart of a neighborhood transformed by waves of immigrants during the 19th century, the church was extensively revised in 1912 but retains much of its original appearance. Remarkable for its airy lightness, the result of daringly high galleries and generous expanses of glass containing the largest panes technically possible at the time, the church’s elegant proportions compare favorably with the London designs of Christopher Wren.

Old North’s first organ was supplied in 1736 by a Newport, Rhode Island clockmaker, William Claggett. There is a sense this organ was imported, probably also second-hand. Thomas Johnston, among Boston’s earliest organ builders, was charged at the outset with the instrument’s care. He become sufficiently frustrated to build a replacement, in 1752, of two manuals and perhaps 12 stops. In 1801 William Goodrich releathered the bellows, adding bass pedal pipes and replacing all the others save Johnston’s Stopt Diapason. In 1821 Goodrich then built an entirely new instrument within Johnston’s case. This survived until a comprehensive rebuild by George Hutchings in 1884.

The 1958 Schlicker organ came at the behest of organist William MacGowan. Edward Gammons served as consultant, the stoplist developed by Hermann Schlicker and E. Power Biggs in consultation with Gammons. Biggs played the dedication. (MacGowan would move on to prominent positions at All Saints, Pasadena and Bethesda-by-the-Sea, Palm Beach, procuring a Schlicker organ for each in turn.) The Old North Schlicker, mechanical-action using the old chests, arrived the same year as Biggs’ Flentrop at Harvard’s Busch Reisinger Museum. While each came from a different universe than the city’s prevailing Aeolian-Skinners or the Holtkamps at the Massachusetts Institute of Technology, eventually it was the Flentrop that drove the tastes and trends to come — the spiritual forebear of a tracker revival that, in turn, produced Old North’s current organ. A. David Moore’s considerable two-manual tracker of 1991 is not strict revival organ, but rather a contemporary interpretation of Colonial organ building. Respecting the organ’s original proportions (and lack of space), Op. 20’s Pedal basses are visible to either side of the handsomely renovated casework. 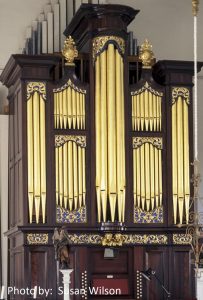