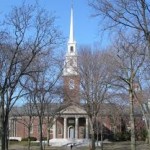 Harvard had a distinct chapel as early as 1744, its location changing regularly until Appleton Chapel settled into the present site in 1858. Though long outgrown, it was not replaced until 1932, when Coolidge, Shepley, Bulfinch & Abbott, successors to H.H. Richardson, erected the present structure as a war memorial. The ponderous columns of the porch announce a prosperous, well-fed neo-Georgian style, a suitable counterweight to the bulk of Widener Library and Richardson’s masterful Sever Hall across the Yard.

Designed and finished by G. Donald Harrison in 1932 and dedicated by Clarence Watters, Aeolian-Skinner’s Op. 886 contained 120 ranks, with 17 more and a large gallery section prepared. While meant to be a pacesetter of orthodoxy, with complete flue and reed choruses on all manuals and pedal, its English bent and smothering chambers yielded a tone more Beef Wellington than Dover Sole, not unlike the chaste-in-principle but plump-in-result architecture.

When Charles B. Fisk (Harvard ’49) turned his attention to The Memorial Church, he hoped to install an organ in the gallery. Overruled by no less than Harvard President Nathan Pusey, the new Fisk Op. 46, completed in 1967, took its place at the head of Appleton Chapel in front of the Palladian window, from where its tone hoped to claw past the heavy rood and into the main church. The first four-manual American tracker organ built in the twentieth century, its disposition reflected the conditions at hand: a strong-toned Great and Positive on top for Sunday, softer Swell and Choir down low for daily use. Op. 46 won over its players perhaps more than audiences, however, and in time came to be seen as compromised as its predecessor.

The two organs now in The Memorial Church reflect the lessons of their predecessors. A recycled 1930 three-manual Skinner, re-engineered and reconditioned by Foley-Baker, was installed in the chapel chambers; what once contained 120 ranks now contain 45. This instrument leads daily Morning Prayers (voluntary, hymn, choral selection) and is occasionally heard in recital; its 1933 Aeolian-Skinner console was reconditioned by Richard Houghten and Joseph Zamberlan. The 2012 gallery Fisk, housed in a case of 19th-century antecedent with brilliant gilt façade, has 43 independent registers and a tonal scheme in that builder’s modern eclectic style. Ingeniously engineered into a limited space, the organ speaks directly into the church to lead Sunday worship, for which the choir, at long last, joins it in the gallery. 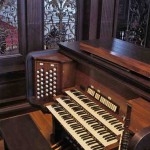 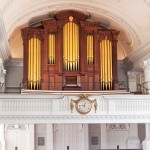