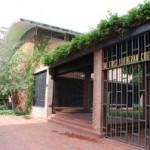 Founded in 1839 as the German Lutheran Society, First Lutheran is affiliated with the Missouri Synod and is the oldest such congregation in New England. Outgrowing earlier buildings of 1847 and 1899 in Boston’s South End, the church expanded rapidly once English replaced German in its services in the early 20th century. The present Back Bay building was designed between 1954 and 1957 by Pietro Belluschi, dean of the MIT School of Architecture until 1965, known for his work on New York’s Pan Am building, Alice Tully Hall, and the symphony halls of Baltimore and San Francisco. First Lutheran’s graceful roof floating over a simple red-brick coffer makes an elegant case for integrating a Modernist building into a staunchly Victorian neighborhood.

In the 1960s and ’70s, Boston-area churches commissioned so many instruments from first-generation tracker-revival builders (Andover, Fisk, Flentrop, Frobenius, Noack, Rieger) that later firms are less well-represented. Thus, Richards, Fowkes & Co.’s Op. 10, of 2000, was a welcome addition: a compact, uncompromising essay in a hybrid Dutch-North German style particularly suited to the music of Bach and his forebears. With suspended mechanical key action and Kellner temperament, the organ speaks with resonant authority into a buoyant acoustic. The historically-modeled case is as confidently anachronistic in Belluschi’s mid-century church as the church itself is nestled alongside Marlborough Street’s row houses. Three stops prepared in 2000—Vox Humana, Schalmey, Cornet—were installed in 2010 to celebrate the organ’s tenth anniversary. Fittingly, the Schalmey and Cornet are of tin. 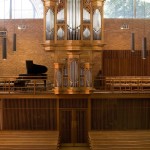