Church of the Redeemer

The Church of the Redeemer was first established as the St. Andrew’s Association in 1885 by a group of Chestnut Hill families who wanted Episcopal worship services. They gathered in the Lee Chapel, now a part of the Chestnut Hill School.

In 1890, the church received the land and funds to build the first Church of the Redeemer, a wooden structure which seated 200 people and was situated near the modern day Old Parish House. The first Rector, Dr. Henry Nash, was appointed the same year.

After receiving more land as a gift in 1907, the leadership decided a larger church was needed.

In 1913, the Building Committee selected the plans of the notable Henry Vaughan for the Gothic-style stone Church.  The congregation agreed and by May of 1915, the consecration of the Church we know today took place.  The dedication of the Victory Tower followed in 1920 and the Tower Bell was dedicated in 1940.

The Church Service League was formed in 1922, and held the first Christmas Market to raise outreach funds in 1950.

The Parish Hall and office complex of today, known as Weld House, was built in phases, the first in 1951. Phase Two in 1962 created the current Parish Hall.

In 1980, the Memorial Garden, a final resting place for ashes, was dedicated. 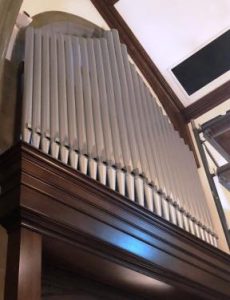 For an extensive article on the Schoenstein Organ, Opus 178, including the stop list,  from the October 2018 issue of The American Organist magazine, please click here