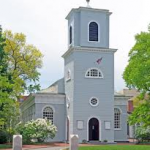 Established in 1759 by Cantabrigians weary of the long trek to King’s Chapel by carriage and ferry, Christ Church is also the work of noted colonial architect Peter Harrison. Loyal to the Crown, the church’s closure became inevitable by 1774. Martha Washington did her best, organizing a service at which prayers for the King’s enlightenment were offered, but a de-
structive riot during a re-opening for a single funeral in 1778 proved decisive. Not until 1829 did finances recover sufficiently to hire a rector. Lengthened by two bays in 1857, and tricked out in Victorian garb, its Georgian sensibilities were restored by 1920, in time for E. Power Biggs’s arrival in 1932. An award-winning restoration began in 2011. Since 1879, when Sunday school teacher Theodore Roosevelt was dismissed because he was not Episcopalian, Christ Church has evolved into a well-known center for ecumenism and social activism. It hosted Martin Luther King Jr. and Benjamin Spock for a press conference to denounce the Vietnam War when neighboring Harvard University declined.

Like many Churches of England in the Colonial era, Christ Church started out with organs from the motherland. Alas, The 1762 Snetzler met a quick fate when its pipes were melted down to make Revolutionary bullets. Not until 1845 did a new organ arrive, from George Stevens, though soon replaced in 1860 by a larger one from William B.D. Simmons. In 1877, this instrument of 23 ranks was moved into a chamber at the front of the church, where it was found lacking, as was its 1883 successor from Hook & Hastings. In early 1941, Aeolian-Skinner completed a 48-rank three-manual in a new chamber; its four-manual console anticipated a never-built 18-rank two-manual gallery section. The strong ideas of consultant Ernest White (of Church of Saint Mary the Virgin in New York, and later tonal director of M.P. Möller) were in evidence, from the paucity of wooden pipes, profusion of tapered registers, and 20 ranks of upperwork. But this splashy light-toned organ was no match for its thin-walled, unhelpful chamber; not even an artificial reverberation system of 1959 helped.

The 2006 Schoenstein is the first pipe organ in this forbidding acoustic to put practicality and principle on even footing. The organ’s high pressures and undaunted volume transcend a chamber now rebuilt with greater density and mass. Near total enclosure (seven registers doubly so) and neo-orchestral ideals offer the player a broad palette of color. The console, initially located on the right, near the case, was moved to a central pit in 2013. The rear-gallery organ, on long-term loan from Harvard University, was built in London by William Gray in 1805, and restored in 1998 by Wissinger Organs. 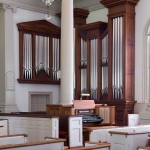