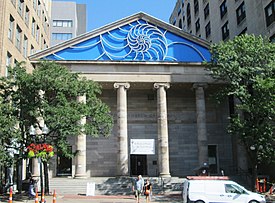 Back when Boston styled itself “the Athens of America,” Saint Paul’s was surely its Parthenon, attended by none other than Daniel Webster. Sitting unencumbered atop a gentle acropolis before disproportionate neighbors encroached upon its personal space, Saint Paul’s was the first Greek Revival building in New England when it opened in 1820. Alexander Parris, an associate in the office of Charles Bulfinch, benefited greatly from his boss’s departure for Washington to assume responsibility for the nation’s capitol. Alongside Solomon Willard, Parris popularized a newly old academic style of singular austerity in smooth granite, most notably at nearby Quincy Market in 1826.

In 1912, a $1 million bequest intended for a new cathedral was redirected toward urban ministries in favor of making an existing church the diocesan headquarters. Sufficient funds were reserved for Ralph Adams Cram to transform a simple east wall into a bishop-worthy chancel, complete with coffered and gilded half-dome, choir stalls, and carved reredos—all this completed by 1922. Established by Warren Andrew Locke in 1890, the vested Choir of Men and Boys served until the mid-1950s, went defunct for a time until revived by Dean Charles Buck in 1966; it survived until 1980. Here the Right Reverend Barbara Harris served as the first woman bishop in the Anglican Communion. Recent renovations from 2013 to 2015 saw the addition of a nautilus sculpture over the unfinished pediment and the suppression of box pews.

Across history, it may be fair to say that the Cathedral’s (then Church’s) earliest instruments were its most distinguished. The 1827 William Goodrich was very large for its day, and possibly Goodrich’s only three-manual. It successor 1852 E. & G.G. Hook was a sizable three-manual even before being rebuilt in 1890 by George Hutchings, who relocated it to Saint Thomas Aquinas R.C. Church in nearby Jamaica Plain. With a Great topped by two tierce mixtures and blazing reeds, Hook’s Op. 160 survives in dilapidated glory, awaiting restoration.

Back at Saint Paul’s, a succession of probably blander Hook & Hastings organs eventually gave way to an organ Aeolian-Skinner devotees know as much by sound as sight, Op. 1207 of 1953. Designed by George Faxon, consultant Edward Gammons, Joseph Whiteford, Tyler Turner and G. Donald Harrison, this 96-rank three-manual was intended as a second-generation American Classic benchmark, updating the style Harrison had first explored at Groton in 1935 and Church of the Advent in 1936. For Saint Paul’s, a Brustwerk joined the now-inevitable Rückpositiv, large Great, and fully independent Pedal. The visual design shows Aeolian-Skinner’s first large-scale attempt to capture some of the functionally-exposed ground Walter Holtkamp had explored so deftly since 1932.

Op. 1207’s rigid symmetry and goofy shutter-concealing curtains (later removed) demonstrated in absentia just how subtle were Holtkamp’s asymmetrical compositions. The organ was soon known far beyond its reach thanks to Aeolian-Skinner’s “King of Instruments” series. In Volume I, narrated by G. Donald Harrison, Op. 1207 is the instrument heard more than any other, played by an unidentified George Faxon. Such was a generation introduced to a new cast of tonal characters (Krummhorn, Nason Flute, Koppel?öte), causing Aeolian-Skinner geeks ever after to repeat such hallowed phrases as “complicated contrapuntal passages” and “The Oboe is interesting.”

In person, however, the organ never gained the cult status of Advent, Groton, or the Busch-Reisinger Museum. While on tour in England in 1956, E. Power Biggs—by then no fan of Aeolian-Skinner—disparaged the Cathedral organ to Harrison’s old boss, Henry Willis III, saying (in Willis’ recollection) that it was absurdly large for the Church and a retrogression from the Church of the Advent. By the 1970s, however, Op. 1207 had found a champion in Thomas Murray, who served the Cathedral between 1973 and 1980 as Organist-Choirmaster, aiding also in the rejuvenation of the Men and Boys Choir. That ensemble was notable for the number of area organ builders populating its back benches: Paul deLisle, Philip Beaudry, Steven Kowalyshn, and particularly Robert Newton of Andover Organ Company. That last connection, coupled to a shared love of Hook organs between Murray and the Andover clan, resulted in the two-manual mechanical-action chancel organ of 1977, incorporating a great many Hook pipes from a closed Swedenborg Church in Beacon Hill. The Andover’s compact three-manual console controls the gallery organ through pistons.

In the Cathedral’s last renovation, much of the gallery organ was removed to storage, where its fate remains uncertain.