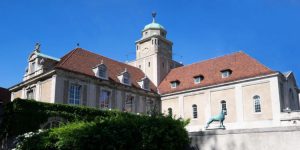 E. Power Biggs was without a doubt one of the most famous concert organists of his day; his recordings are still widely available. Many of those recordings were made right here, on this very organ.

Born in England in 1906, Biggs emigrated to the United States in 1930, and settled in Cambridge in 1932. By that time he had already begun to build a name for himself as a touring concert organist.

The 33-rank, mechanical action Flentrop organ in Busch Hall was made famous by concert organist E. Power Biggs. After experiencing the historic organs of Europe on a concert tour, Biggs commissioned this instrument in 1958 from the Dutch organ builder Dirk A. Flentrop, who was notable for his instruments that revisited the original Baroque style. This so-called “Neo-Baroque” instrument in Busch Hall was at the forefront of a surge of interest in classic organ building techniques across America. Biggs brought this classic appreciation to a larger audience through his recordings and live radio broadcasts from Busch Hall. His recordings of Bach introduced many Americans, organists and enthusiasts alike, to a new historically informed approach to playing. This Flentrop was truly Biggs’ instrument; he continued to perform and record on it until his death in 1977. The instrument and Biggs’ legacy live on, as the Organ Society hosts a weekly recital series in which the audience can hear the clarity and precision that Biggs so loved about his instrument. 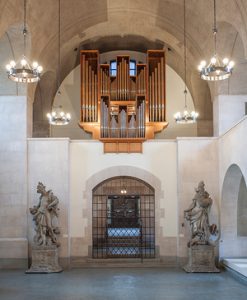 The instrument is in classic “Werk-prinzip” formation, that is to say, each division is clearly delineated architecturally. The Great manual (Hoofdwerk) is in the middle on top, with the Brustwerk underneath. The big pedal pipes are in towers on either side, and the Rückpositiv (which in England used to be called the “Chaire” organ) is on the front of the gallery, behind the organist’s seat. The stops are all those which Bach would have known, and the connection between keys and pipes is entirely mechanical (“Tracker”)—unlike the G. Donald Harrison instrument, which had electric action. The pipes, voiced on low wind pressure and placed on the historic form of slider chests, have a gentle, alive quality of sound, and the open-toe, unnicked voicing gives an articulate quality. This instrument was among the first examples (and for many years by far the most prominent) of the “Baroque” or historical organ revival; Flentrop subsequently installed many other instruments throughout the United States. This organ therefore had and continues to have a profound effect on organ building and organ playing throughout this country. – from the Harvard Organ Society website